Problem to be Addressed

Genetic engineering techniques have become so inexpensive, we can easily and permanently reorder the code of life, irreversibly altering wild populations of any organism that contains DNA.

We face the unprecedented threat of the widespread corruption and replacement of nature’s gene pool. In the U.S., gene-edited organisms can be released into the environment without any assessments.

A farm will be able to order custom engineered insects, seeds, soil microbiomes, and pesticide sprays.

A new gene is forced through future generations of an entire species, changing its DNA and even wiping it out.

The U.S. Department of Defense is developing insects with viruses that infect and alter plants.

Biotech driven by artificial intelligence will create more and invasive changes on a massive scale.

Genetically engineering higher organisms typically elicits greater ethical concerns. People are rightfully disturbed at the prospect of permanently changing our genetic makeup with designer babies. There isn’t as much concern with altering animals, and less so with plants. And almost no attention is paid to altering the genome of microorganisms, but nearly anybody can do it. You can buy a kit on Amazon for only $169.

Ironically, the lower life forms often pose the greatest dangers—from both an environmental and health perspective.

GE microbes can spread swiftly through ecosystems, cross borders, and encircle the globe. They can cause enormous damage to the environment. And the pandemic demonstrates how microbes, whether engineered or not, can threaten our health, economy, and lifestyle. 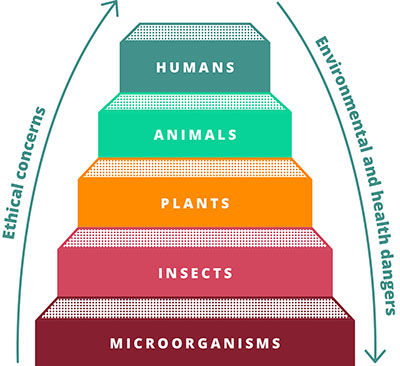 On Christmas Day in 1859, the Victorian Acclimatization Society released 24 rabbits into the Australian countryside so settlers could hunt them for sport. This led to disaster because rabbits multiply like…rabbits.

This is just one species on one continent. Imagine the impact of releasing tens of thousands of new versions of species worldwide. That is the alarming and unpredictable future we face with GMOs.

The most common outcome of genetic engineering is surprise side-effects. We can’t predict whether our delicate ecosystem, which evolved naturally over billions of years, would survive the assault of these new species.

In the U.S. and around the world, an increasing number of GMOs are not subject to scientific review by any government agency—and reviews that are conducted are often woefully inadequate.

This makes the upcoming planned release of 750,000,000 Gene Edited (GE) mosquitoes in the Florida Keys extremely troubling. They are known to permanently corrupt the gene pool, producing a new version of mosquito with unknown characteristics. And that’s just one of a long list of GE insects in the pipeline.

Releasing GMOs into the environment forces all future generations to inherit our mistakes. The decisions we make now will determine whether they inherit the offspring of billions of years of evolution, or the products of unregulated laboratory techniques that corrupt and replace nature’s gene pool.

Our Protect Nature Now campaign ensures we prevent disastrous mistakes from multiplying across the globe… like rabbits.